Perfect voiceover for your game: 6 required inputs for voice talents 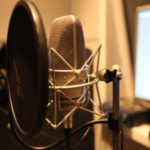 Video games become more and more cinematic. This brings a lot of attention to voices that game characters speak with. Great voiceover adds another dimension to the action and makes the game experience more immersive and the game itself more engaging. In good video games, each hero has his own temper, his own voice, even his own unique locution. Breathing life into game characters, making them real and likeable is the ultimate goal for voiceover artists.

As a rule, creating a voiceover for each of the game characters requires a whole cast of voice actors. Through screening of the trial records best performers and their best takes are selected.

A person in front of the mic in the recording studio bears a lot of responsibility. It takes a ton of preparation to impersonate the character in a way that clearly communicates his disposition. Here is what the voice talent needs to make his preparation effective:

All these element will help the voice actor to make the character believable and attractive to the player.

If you need a voiceover for your game in English, Russian, Ukrainian or any of the European languages – reach out to us at info@universemusic.com.ua and even in trail records you will see that your game characters can be so real that you would want to touch them.